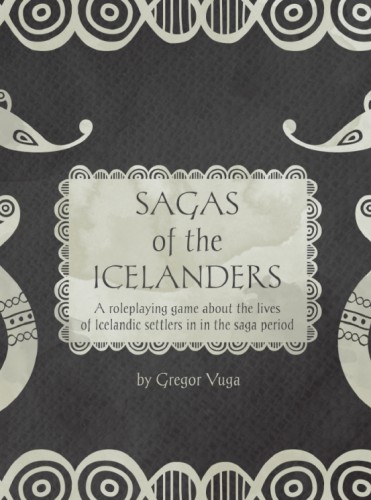 Sagas of the Icelanders
by Gregor Vuga

Sagas of the Icelanders is a game based on Apocalypse World by Vincent Baker. Like others in the Powered by the Apocalypse family it supports an open-ended style of play, focused on drama and conflict. Changing the limitless post-apocalyptic landscape for a specific historial frontier, it throws the characters into precarious social situations dictated by their own traditions.

The game is set sometime after the year 874, when the first Norse settlers set foot on Iceland. They were escaping war, poverty and the dissolution of their political freedoms on the mainland. Their families and the people that followed claimed the empty lands, free from rulers and religious pressures, and became lone farmers, determined to survive in this harsh new environment.

In Sagas of the Icelanders you play as one of these settlers between the end of the 9th and 10th centuries, also known as the Saga Period. You need to weigh between upholding your honour, your freedom, or the lives of you and your family. Challenge harsh social norms, get drawn into bloody feuds, and fight to survive another winter. Tell the stories of the settlers’ families, their lives, trials and legacies. Build a new society from scratch and discover or change history as you forge a veritable Saga worth to echo through time.