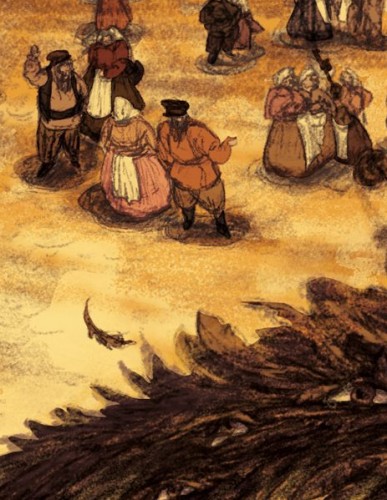 Dream Apart gives us demons and wedding jesters; betrothals and pogroms; mystical ascensions and accusations of murder; rabbi’s daughters running away to be actresses or bandits or boy soldiers; the sounds of the shofar ringing through cramped and muddy streets, of cannon fire, of the wolf’s footfalls in the snowy pine forest; asking “What do you do next?”

In Dream Apart you play a Jew of the shtetl, a little mostly-Jewish market town in the Eastern European countryside. In the cities, the industrial revolution has begun. Prussia, Russia and the Hapsburgs have devoured the small countries between them. Surrounded by an often hostile Christendom, by wild forests in which anything might creep, and by the invisible creatures of the Unseen World — angels, demons, ghosts, and dybbuks — the Jews of the shtetl try to outwit or outlast those who would do us harm. We feud and reconcile, bargain and gossip, celebrate and mourn, and snatch a little joy and love while we can. Life in the shtetl is sweet as raisin pastries and bitter as horseradish: may it be the Divine Will that it endures another season…

Find this game at Buried Without Ceremony.