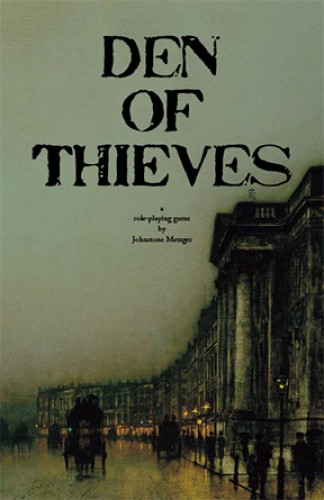 Den of Thieves
by Johnstone Metzger

Den of Thieves is the revised version of a game I wrote in 2009, that has more or less been on a back burner since 2010. I haven’t seen anything similar to it since then, though, so I thought I should maybe polish it up to let other people take a look at it.

It’s a game about fantasy thieves in a fantasy city, with magic and whatnot and a sort-of Victorian underworld vibe. The rules are probably closest to Otherkind Dice (i.e. Ghost/Echo) but a little more rigid. You need a deck of cards to play. Each card represents a specific person, place, thing, or event. You make a map of cards laid out on the table, and you also draw cards to resolve actions, instead of rolling dice. The game is structured in scenes, and you can play with or without a GM (that role is split in two).

The intention is that each time you play, you choose a custom decks of cards, instead of an adventure scenario. Each deck would have a different set of people, places, things, and events, each with their own special rules. Production-wise, this is actually a lot easier to do now than it was in 2010, so possibly I should be thinking about working on this game again.

You can play it if you like. Let me know how it goes. What’s missing is a section telling you how to play the roles (protagonist, dealer, antagonist). If you’re familiar with games like Apocalypse World, Fiasco, and Ghost/Echo, it shouldn’t be too hard to figure out, though.