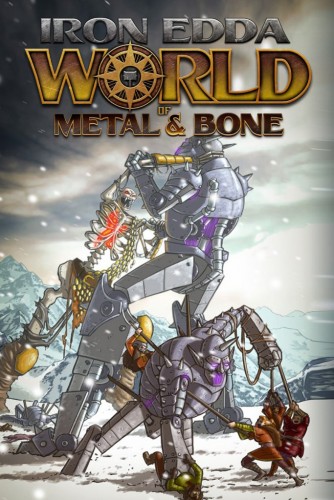 Iron Edda: World of Metal and Bone
by Paul Stefko

Dwarven Destroyers stretch shadows across Midgard, a harbinger of war to come.

Brave human warriors abandon clan and holdfast to bond themselves to the bones of dead giants, hoping to push back the Destroyers.

Strangers from others lands appear in Midgard, bringing with them strange powers, and tales of war abroad.

Seers advise and divine the future, but the fate of the world is murky and dim.

Jarls, thralls, and warriors fight in common cause, shouting “victory or Valhalla!” as they charge into battle.

Ragnarok has come, and you live in a World of Metal and Bone. Will you dine with the gods in Valhalla, or dance with the dishonored dead?